Last week (Sunday, 6/7/09), I got the opportunity to spin for Puma at the Home Depot Center before the LA Sol soccer game. I was situated inside their big tent in front of the stadium.

I got there pretty early to make sure I was ready and setup by the agreed time. Here's my stuff while waiting for the big tent to be setup: 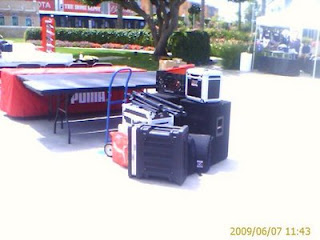 The people that were contracted to setup the big tent were running really late, so I helped setup the smaller tent: 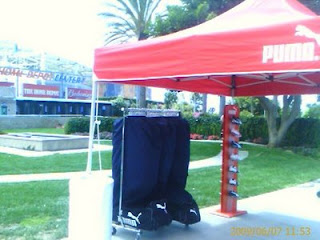 By the time the people got there for the tent, I only had 15 minutes to setup; it was the fastest I ever setup my stuff. Here's my table when I finally got it all setup and ready to go: 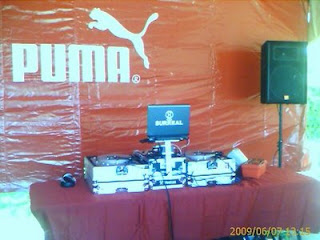 Here's a view from the outside when everything was all setup: 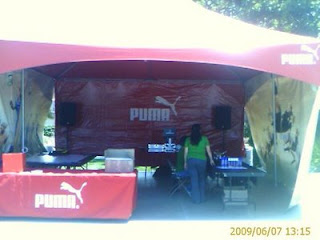 The music criteria was "clean versions of top 40" so it was fairly easy to pick which songs to play. The hardest part was making sure the songs I had were clean versions. I should go through my library again and label them accordingly.

The tent had a spray paint tattoo artists who spray painted the hairs of kids with LA Sol colors and gave them stenciled "tattoos". They had a long line of kids waiting them. There was a also a place for kids to sign on a big white cardboard which was later given to the LA Sol team. Here's my view: It was a great experience and I met some really nice people from Puma. Hopefully I get to work with them again.
Posted by DJ Surreal