A Sad Day, A Legend Falls

Today is one of those days where, in the future, people are going to ask you "where were you that day?". Today, Michael Jackson, the legendary king of pop, leaves us after a cardiac arrest. I heard about the news after a co-worker shared a link to the developing story and couldn't believe it until finally the LA Times confirmed it. Normally, a celebrity passing doesn't affect me much, but MJ was different. Upon finally realizing that the news was true, memories of how MJ was part of my life began running through my head.
The earlieast memory I have of MJ were a pair of LA Gear shoes that my dad bought me as a present. They were black high tops, studded with gold pieces with two sets of shoe laces; black and gold. I remember dancing with those shoes while singing "We Are The World". From there, I would grow to love his music and finally buy his album "Dangerous" as one of my very first casette tapes (which I still have). Unfortunately, that's the only album I own but I have his singles on vinyl and compilation vinyls. As a DJ, Michael Jackson's music never failed to get a reaction from the crowd. Dropping "Billy Jean" at the height of the night was my favorite thing to do.
I'm looking forward to his last, unreleased album, "7even". I don't know why MJ never released it but hopefully, I'll get a chance to own another piece of his work.
Rest in peace, Michael Jackson. I will continue to play your music as long as I am a DJ. 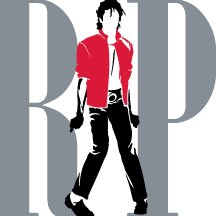 thanks @trvsbrkr
Posted by DJ Surreal

Email ThisBlogThis!Share to TwitterShare to FacebookShare to Pinterest
Labels: RIP